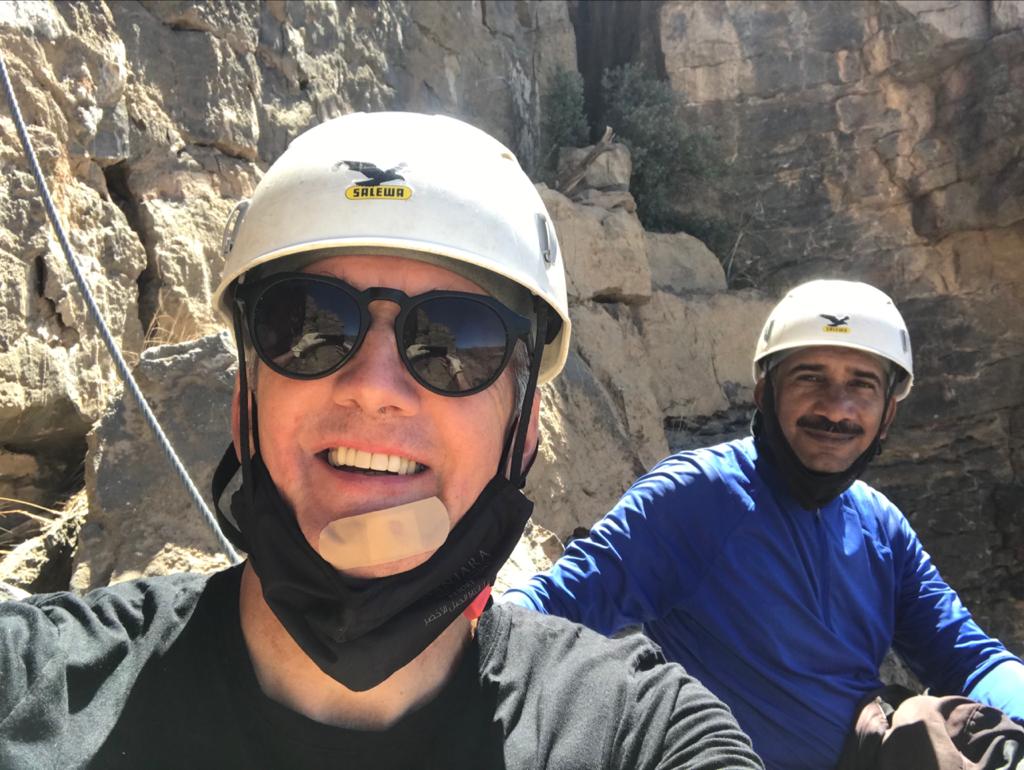 Go, tell it on the mountains

When Robert MacLean, principal, National Hospitality Institute decided to take up a via ferrata climb of Jebel Akhdar three weeks ago, he did not know what to expect. However, once done, he came back not just with renewed vigour of having accomplished something he hadn't tried before but also with an enthusiastic spirit that seemed to scream for an encore.

Doing a via ferrata is something that calls for great attention and an acquired skill to keep your feet firmly rooted to whatever you step on. Though the task ahead might seem Herculean, the will to focus on the steps in front of you and enjoy every moment is what will ultimately make one shout for joy from the mountain top. After all, more than anyone else, you need to tell yourself in no meagre terms, about the achievement which strengthened your nerves.

“When I first agreed to do it, I was a bit hesitant as to how difficult it was going to be. The pictures look a bit scary. However my climbing guide Sulieman was fantastic,” said Maclean, adding that one doesn't need a great level  of fitness to take up such a climb, though one must be a good listener. “I learnt to listen carefully to instructions. When your guide is the person who is going to keep you safe, you listen to what he tells you,” he added.

Jebel Akhdar, also known as 'Green Mountain', is the most popular peak for climbng expeditions in the Western Hajar Mountains, located around 150km from Muscat. It rises to a height of 2,980m and encompasses the Saiq Plateau at 2,000 m above sea level. Jebel Akhdar is famous for its labyrinth of  HYPERLINK "https://en.wikipedia.org/wiki/Wadi"wadisand terraced orchards, where pomegranates, apricots and roses grow in abundance due to its mild Mediterranean climate.

Given below is a candid account of how Robert MacLean, principal, NHI, recently took up a via ferrata climbing expedition:

Why did you take up climbing Jebel Akhdar?

I have made a few climbs in the past in the but would not consider myself  a real climber. However, I was motivated to carry out this climb at Anantara on Jebel Akhdar as I love the place. It’s got a great feel about it in terms of peace and tranquility. I think, it’s great that the hotels are adding to their guests experience by making these events available. It allows the guest to get a real feel of the place.

Was it as you imagined or were there hurdles?

Well, when I first agreed to do it, I was a bit hesitant as to how difficult it was going to be. The pictures look a bit scary. However my climbing guide Suleiman was fantastic. He explained the whole route very carefully and described what we were going to do. There were parts which were a bit tough in terms of grips and footwork. The zip wires were a bit scary, too, but they are very well managed and I felt very safe.

Has this been your first experience or have you done it before?

I had done a small amount of climbing but this was my first via ferrata and zip wire experience. It is very structured and ideal for those who love to climb but don’t have the skills to work on open ropes.

What lesson did you learn and are you fit enough to go for more?

I learnt to listen carefully to instructions. When your guide is the person who is going to keep you safe, you listen to what he tells you. I don’t think you have to be very fit to do this and the guides will advise you if they think you are okay to carry out the different parts of the climb.

Was there anything lacking at the site? Do you have any suggestions for newcomers?

I think, the site was great and well organised. The only point I would like to note here is that this climb can be booked through the hotels even though you are non-resident. You don’t have to be staying at the hotels to do this. I recommend people to try it. Jebel Akhdar is a beautiful place and its a great opportunity to get out of the city and see the mountains.

What's a via ferrata?

A via ferrata is a climbing route that employs steel cables, rungs or ladders, fixed to the rock to which the climbers affix a harness with two leashes which them to secure themselves to the metal fixture and limit any fall. The cable and other fixtures, such as iron rungs, pegs, carved steps, and ladders and bridges, provide both footings and handholds. This facilitates climbing on dangerous routes without risks and expands the opportunities for accessing difficult peaks as an alternative to mountaineering or rock climbing, both of which require higher skills and specialised equipment.

Where to stay at Jebel Akhdar

The central Hajar where Jebel Akhdar is located is a tourist favourite because of its breathtaking terrain. This area has many hotels and campsites where visitors can stay overnight. For a luxurious stay, the Anantara Al Jabal Al Akhdar Resort is the best bet but there are more affordable options nearby. One can also stay in Nizwa which has a good selection of hotels and guest houses to suit all budgets.