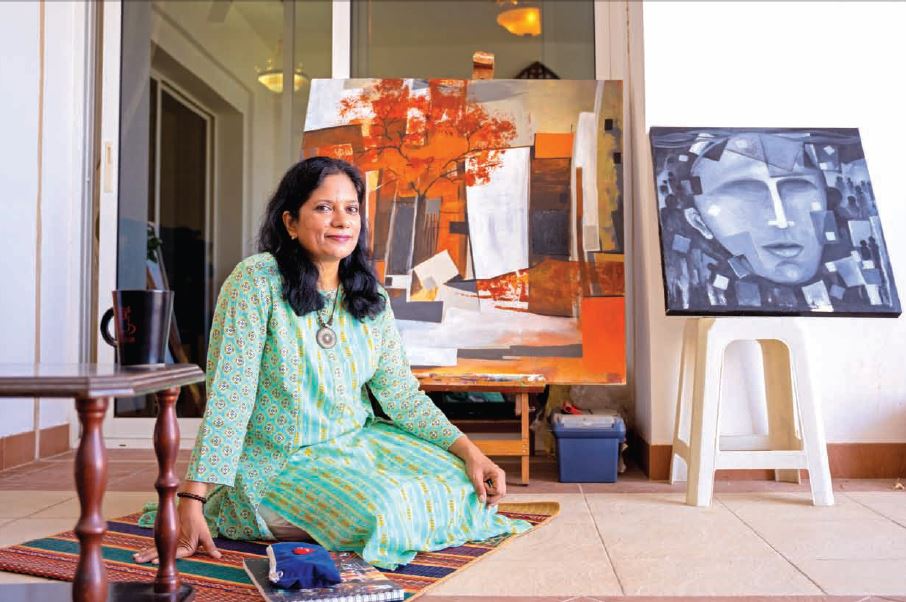 Art is part of life

Harini Kumar, an Indian artist residing at Boushar who works with a variety of mediums, from pen and ink to oils, believes that art is something inherent which cannot be suppressed by worldly cares or pursuits – it will someday find its way and flow forth just like a stream of water.

That's exactly what happened with Harini. Though she had a good hand for drawing and sketching from an early age when she always shone among her peers in school, she never really thought she would some day end up as an artist of repute. Vocational training helped sharpen her skills but it took her some time before she actually found her feet.

A Fine Arts graduate from Stella Maris College, Chennai, Harini began her journey in art by working as a freelance illustrator for school books and magazines, before moving to Muscat in 1994 when she also did a stint as a graphic designer though her heart always was in paintings. Somewhere down the line, she relinquished her commercial quest to settle down with her own canvasses to convert her innermost passion into a meaningful art in many abstract forms.

“Art is something larger than life for me. I cannot spend even a day not doing something in art. I have to do some little illustration, and I can do it in any part of my home, not necessarily in a studio - it has become part and parcel of my life. I'm a semi-abstract expressionist artist,” says Harini, who has been regularly commissioned for original paintings by art lovers from Oman, India and other parts of the world. Over the past 15 years, she has also participated in many exhibitions in Oman, Dubai, Abu Dhabi and Greece.

A great admirer of Dutch impressionist painter Vincent van Gogh, American abstract expressionist Jackson Pollock, English painter George Clint and Spanish painter Pablo Picasso, Harini disclosed that many of her paintings have an element of cubism (a highly influential visual arts style of the 20th century introduced by Picasso) which she discovered only when it was pointed out to her by a curator in the UAE.

Harini makes it a point to bring art into every aspect of life in her home, whether it is the arrangements/colour combinations of things at home or even outdoors. And, she admits, this obsession often irks her family members but they have learnt to accept it and it has become part of their lives, too.

About the love for art in Oman, Harini feels that realistic art has better acceptance in Oman while abstract art has few takers. “I've not seen many people buying art in Oman, but the ones that do, are very appreciative of it.” she asserted.