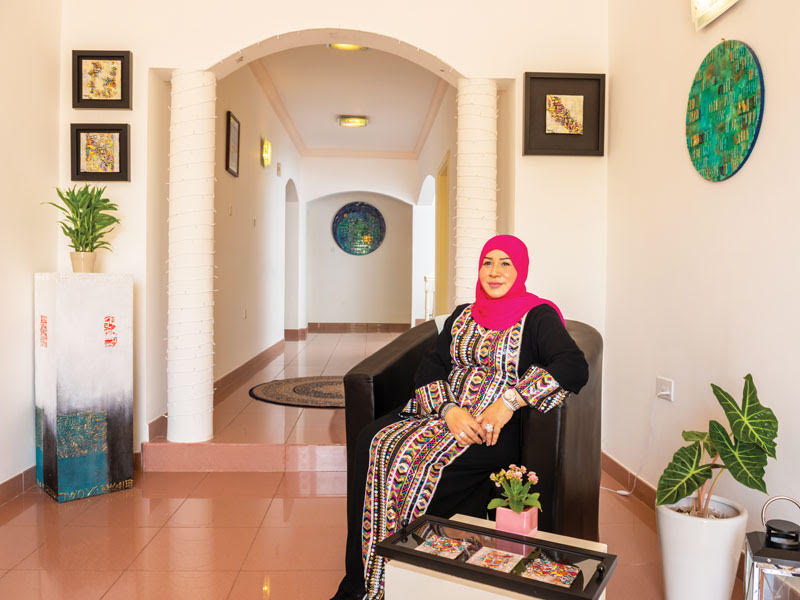 Home is where the art is

When you open the main door to her bungalow in Bousher, art does not hit you in the face, neither is there any indication of it on the exterior. But, as you let your eyes focus on the interiors, you slowly wonder whether you've entered an elegant art gallery where every piece has been tastefully curated and placed in a spot where it belongs.

For Tahira al Lawati, popularly known as Tahira Fida, home is where the art is, quite literally. For someone who imbibed lessons in art at a very young age from her mother (who was also an artist), the need to express herself in artistic terms comes quite naturally. Be it choosing her own garments or the interiors in her home, laying the table for a buffet or delivering a lecture to students in college, art invariably finds its way and overpowers everything she does.

“For me, art is life or life is art, you can say it any way. My mother trained me to do intricate things at an early age, from embroidering cushions to cooking, all aimed at making me a talented wife someday to run my home efficiently. But it was when I joined a GCC competition, wherein a collage of a bird made with bits of egg shells on velvet won me thesecond prize, I realised that art would someday become a big part of my life,” said Tahira, adding that the initial encouragement from her mother set the path before her for a fulfilling career in art.

As she grew up, Tahira not just studied, but also taught, art as well as English in a private school in Oman. In a bid to fulfill her childhood ambition, she later pursued a master's degree in art from the University of Arts in London and came back refined and replenished with renewed vigour to take her career as an artist to greater heights.

After achieving esteemed qualifications in art from London and interacting with artists from all over the world, as well as travelling to different parts of the world to view the work of accomplished artists, Tahira says, “It then felt as if I have begun drowning in art. I was breathing art, I was eating art, everything I did was overwhelmed with art. Now art has become my life.”

Tahira has tastefully decorated her home with her artworks without overdoing it. If you glance around, everything that you see, from the carpets to the drapes, from the furniture to crockery, all seem to have a unique elegance about it which make them appear artistic and apt.

Tahira's family (her husband and two sons) have also come to terms with the fact that art is inseparable from her persona and often family conversations revolve around art. Her artistic inputs are often considered paramount in all decisions concerning their lifestyle as well as in the decoration of their own homes.

Tahira, who teaches Research Skills at the University of Technology and Applied Sciences, says, when she comes home she likes to have her own breathing space, which she gets only through her art – a solace and succour that lifts her spirit! Most of her art can be described as mixed media 3D art, though some of it is semi-Islamic art, she said, explaining that you also find letters from the scripts of five languages that she speaks (English, Arabic, Urdu, Persian and Lawati) in her artworks.

For Tahira, art exists not only in her canvasses or creations but in every aspect of her everyday life. And, she often wonders if there is anything else to  life, besides art.