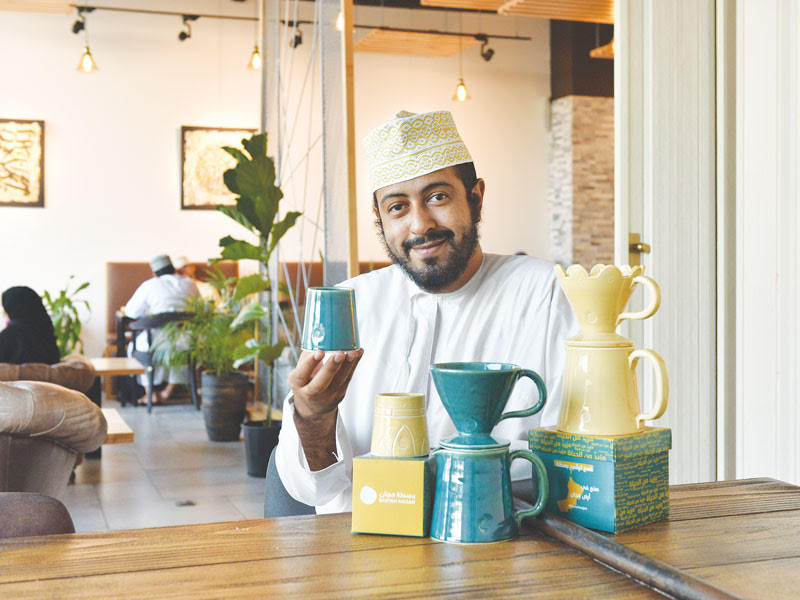 Bastah Majan, an indigenous chain of traditional coffee lounges, set up by Fahad al Saqri, a young entrepreneur, has now introduced a set of signature coffee utensils that represent the cultural heritage of Oman.

As one sips coffee at this lounge, prepared in many local flavours, like Salalah Latte,    , etc, one also gets an opportunity to get up, close and personal with the heritage of the sultanate as the coffee utensils have designs inspired by historic edifices which speak volumes of a bygone era.

Saqri, who set up his first coffee lounge at Azaiba a few years ago, after being inspired by the coffee lounge trend in the West which was akin to Oman’s own tradition wherein people met over coffee to socialise, now has a second outlet at Mawaleh and is all set to open his third outlet in Al Khoudh this week.

“I wanted to do something new as a businessman and faced much discouragement from my friends and acquaintances as well as from my own family when I voiced my idea of an Omani coffee lounge. People said, I had no chance to compete with the popular international coffee chains which have set up base in the sultanate many years ago. However, I persisted in making my dream a reality,” said Saqri, adding that much hard work and planning as well as his own resources went into this venture which has now become very popular with Omanis, young and old.

To add a more traditional touch to the ambience within his coffee lounges, which are being used by young students as well as senior professionals for unwinding or having serious business interactions, Saqri has introduced a set of coffee utensils in two earthy hues, each comprising a coffee cone (dripper), a 750ml capacity serving jug and a tumbler for drinking that’s smaller than regular coffee mugs. These are being used to serve coffee within the lounge as well as put on sale for purchase by patrons.

Saqri explained that he has got the coffee utensils custom made by a popular small scale business outlet in Bahla which is known for its traditional pottery. The utensils are made from clay and baked as well as glazed with the signature seal of Bastah Majan on it. While the coffee dripper resembles the local incense burner, the design of the mug is inspired by the tower of Nizwa Fort. One set has been created in a rustic hue resembling the beige fort walls while the other set has been made in a greenish hue resembling the greenery of Dhofar and Jebel Akhdar wherein he has family connections.

“At Bastah Majan, we are constantly innovating. I don’t want it to be just a coffee lounge but a place where people get acquainted with the culture of Oman and the hospitality of the people. We also regularly conduct seminars, group discussions, lecture and many other events within the lounge as well as offer the walls for budding artists to showcase their talent,” says Saqri, adding, “expect more surprises in coming days.”