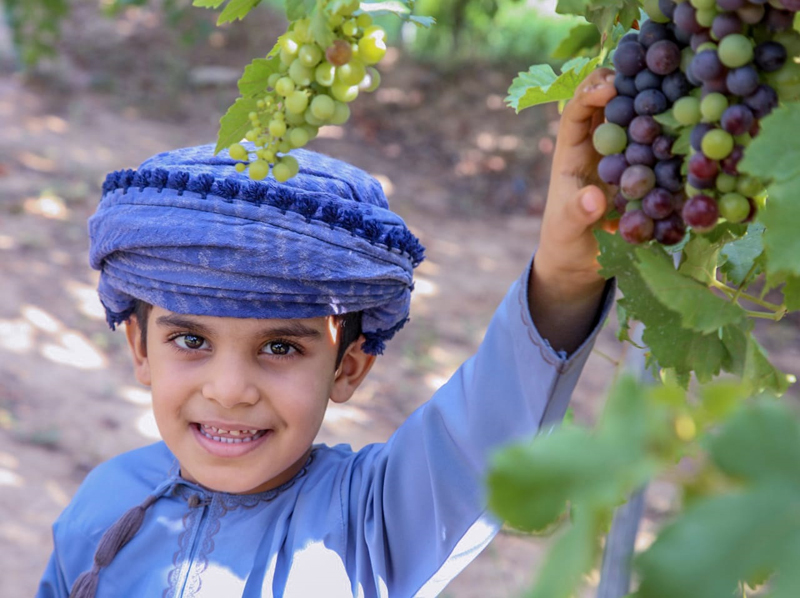 Al Rawdha village in Wilayat of Mudhaibi, in Governorate of North Sharqiyah, is unique in its diversity of agricultural crops, the fertility of soil and the abundance of water throughout the year. The environment along with the special attention by farmers has led to successful cultivation of date palm trees, citrus fruits, as well as grape cultivation which stands out as one of the most important agricultural crops in the village.

Currently grapes are abundant in the markets of Mudhaibi and neighbouring wilayats, providing great economic returns for farmers, as well as being able to compete with imported grapes.

Eng Qais bin Amer al Ma’awali, head of the Agricultural Development Department in Samad al Shan, said, “The cultivated area of grape in Al Rawdha village is estimated at 13,000 sqm and about 14 tonnes of fruit is produced at a value of upto RO20,000 annually.”

He added, “There is a great interest in the Ministry of Agriculture and Fisheries in grape cultivation. The ministry provides material and moral support to farmers, including seminars, improved seedlings, introducing farmers to modern agricultural methods, and promoting agricultural products.”

Sarhan bin Shatit al Habsi, a grape farmer in Al Rawdha village, said, “The interest in growing grape is continuously increasing. It receives significant attention from farmers and officials in the wilayat. This has resulted in cultivation of the fruit over large agricultural areas in recent years.”

The availability of fertile agricultural soil and fresh water, whether from Aflaj or wells in Al Rawdha village, has also greatly contributed to the success of grape cultivation.

Habsi informed that that there are many types of grapes, including black, white, and Lebanese varieties. Harvesting of grapes in the village starts from June and ends in August. “The price per kilogram of grape during this period reaches approximately RO1 to RO1.5 and they go up at the end of the season. Grapes are marketed in the neighbouring wilayats and sometimes sold directly in the farm.”