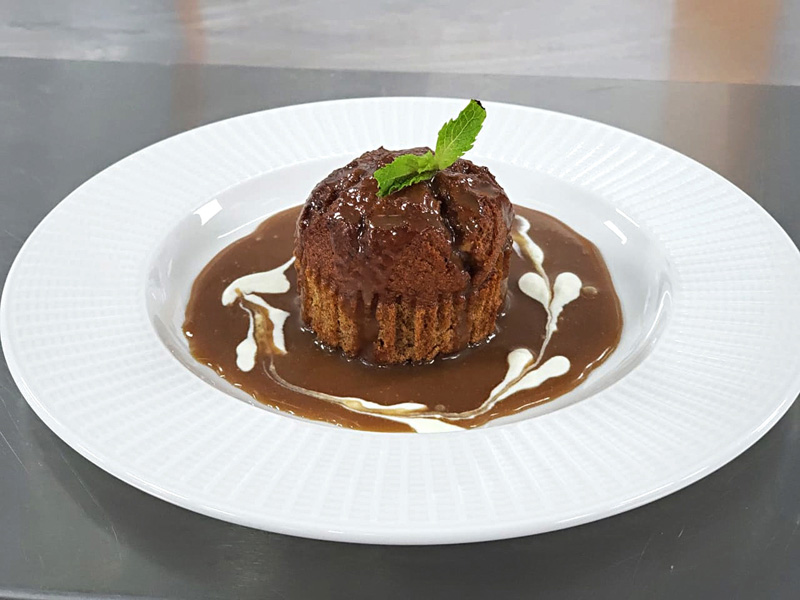 The apetising aromas of fully ripe dates, butter, sugar, vanilla essence seemed to circle around his workstation at the National Hospitality Institute as Chef Shabu Thambi got set to deliver an online lesson for a dessert, to a select batch of his students, on a warm afternoon last weekend.

It was 1.30pm as he poistioned himself and his ingredients and utensils in a small area in his kitchen so as to fall within the range of his smatphone dexterously placed before him. As he tied the strings of his apron, Shabu, who has delivered numerous lessons to numerous students over the years, seemed a bit nervous as he did not want to leave loose ends in this online class.

“My job is to deliver an online lesson in the most simple manner that is understood by everyone and that is why I have chosen Date Pudding as my first lesson, since it is a very simple recipe as well as to begin on a sweet note,” said Chef Shabu, impatiently checking out his watch.

Soon there was a 'Hello Chef' coming in from a few students as his phone screen lit up with the names and faces of a few students who chose to attend this online class from home. Some were in front of their own work stations in their kitchens while some chose to get a grasp of the live procedure before actually trying their hands.

“So let's start,” said Shabu beginning his class by acquainting all partcipants with the ingredients required, a copy of which had been circulated in advance to allow participants to get set for the class. “This is a simple recipe, without any complicating procedure, and anyone can make it at home within 30-40 minutes,” he said.

Starting out by creaming butter, sugar and eggs, before adding flour, spices, vanilla essence and pureed dates (which were boiled for a few minutes with a little soda bicarbonate), Shabu displayed his sheer mastery in the kitchen, and surprisingly, some students managed to stay in step with him al through.

The pudding mixure was then poured into cupcake moulds and placed in an oven to bake for 20 minutes while Chef Shabu proceeded to make a delightful sauce by blending thick cream and brown sugar over a slow flame. Once done, he plated his pudding with a generous helping of the sauce and a mint leaf for décor.

The students were all smiles by the end of the class, some of whom had replicated Chef Shabu's recipe with ease. And if there was someone salivating over the delectable dessert churned out in minutes, it was none other than Robert MacLean, principal of NHI, who chose to supervise this online sweet exchange.

No, Chef Shabu did not stiffen up at the sight of his boss tucked between the other participants of his class on screeen. In fact, his presence served as a catalyst in this lockdown lesson, And if you took one look at MacLean's expression at the end of the class, it seemed he could actually smell the aroma of the freshly baked date pudding.

NHI's online class began with an easy dessert but the institute plans to conduct a series of online cooking classes for those interested who can register in advance. Initially the institute's trainees will be participating while later on, others will be invited to join in, Chef Shabu said, adding, “We will produce theme dishes such as for 'Steak Night', as well as homemade baked pasta and vegetarian favourites when we are ready to open up.”