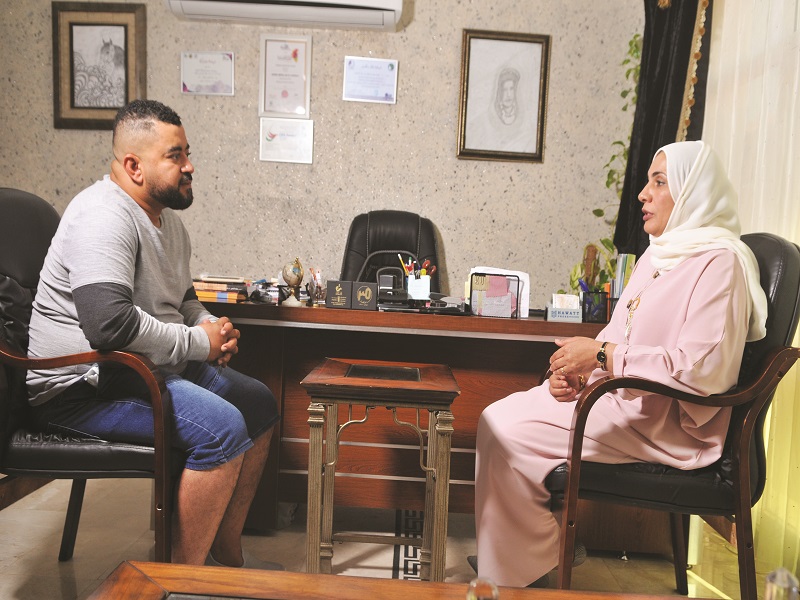 'Thank you is not enough'

Almost three years to the day since he first came here, Saud al Qasmi revisited Shuroq al Amal al Alamia on January 8, 2020. He came to consult Dr Zahra al Harmali, its founder and CEO, on an important family matter. He had been using drugs for more than 15 years when he decided to clean up and visited the rehabilitation centre for the first time in January 2017.

The recovered addict has been employed as a well testing supervisor for over a year now, besides a stint in a Saudi rig. Back with his wife and two children, he said he has got his family and life back, thanks to Shuroq al Amal al Alamia and Dr Zahra.

Dr Zahra started Shuroq al Amal al Alamia in 2015 to rehabilitate drug addicts. A non-profit centre under the supervision of and licensed by the Ministry of Health, it is registered with the Ministry of Commerce and certified by Royal Oman Police.

“Parents who had money took their children to Bahrain, Egypt, Indonesia, Tanzania… for treatment. There was no facility in Oman. So what happened to addicts whose parents had no money?” Dr Zahra said, explaining what led to the opening of the centre. “We treat male addicts who are 18 and older, but addicts as young as 11 and as old as 65 come to us.”

Operating from a rented villa in Al Hail North, it is equipped with detoxification facilities, two meeting halls, ten bedrooms, a gym, recreation room and a kitchen. Staff include two psychologists, three counsellors from the Ministry of Awqaf and Religious Affairs, a physical trainer, an HR trainer, a job trainer and security.

With a capacity to admit 30 addicts, the centre employs Narcotics Anonymous’ international programme, treating them for the physical and mental dependence on drugs before bolstering them spiritually against any temptation. The road to recovery includes yoga, meditation, art and golf, among other activities.

“The physical dependence on drugs can be treated in one or two weeks, following which we focus on the mind. Anything can trigger a relapse, so we want to resolve issues here before they start a new life outside these walls,” Dr Zahra said. The centre requires a minimum stay of six months before addicts are allowed out but they have to continue coming back for counselling. “For recovering or even recovered addicts, we have to be with them for lifetime.”

Dr Zahra, however, emphasised that the centre is not a ‘jail’. “Some of the addicts are already familiar with life behind bars before coming here. We don’t want them to think they’re in another prison when they come here. We tell them, ‘If you want to recover, this is the place for you. We are here to help you. And the door is open. Any time you feel you want to go home, come tell us. Just don’t jump the over wall,’” she pleads with her patients.

Our society needs to understand that this is a disease. You can be an addict of coffee, tea, food, shopping, sleeping… we are all addicts of something. It is a behaviour.” Urging a change in the approach to drug addiction, Dr Zahra said, “Parents think admitting having a drug addict son will spoil their reputation in society. That if neighbours come to know there’s an addict, they won’t visit. People get divorced because of drug addiction.”

Dr Zahra counselled cancer patients in SQU Hospital before she started working with addicts. She has since trained as a therapist in different areas of drug addiction and mood change and holds a Master’s degree and a PhD from Cairo University. After attending a conference on drug addiction, she became aware of the situation. “I started researching and found out the extent of the problem. I also came to know about the Al Hayat Association and got involved in its work, counselling addicts and parents at the correctional clinic.” Al Hayat shut down in 2017.

But soon after opening Shuroq al Amal al Alamia in 2015, she started running into funding issues which continue today. “I ask people to adopt individual cases so that we can treat them,” she said, adding that corporate entities and smaller businesses have contributed since its opening. “In the first year, a bank adopted two patients. Another corporate entity paid rent for six months.

A prominent business paid the rent for six months in 2016 and 2019. Companies who prefer to give anonymously have helped to keep the centre running,” she said. “Once they adopt a case for treatment, some people continue to pay till the addict is rehabilitated. But many others stop after one or two months. What will an addict do if the treatment funding stops? I can’t ask him to go. He’ll relapse. I’d rather keep him here for the sake of his recovery,” Dr Zahra said, revealing the daily struggle she faces in running the centre without proper funding. Despite the struggle to find funding, Dr Zahra and her staff remain committed to Shuroq al Amal al Alamia, thanks to the success they’ve had with recovered addicts like Saud who are now active members of the community.

“When a mother calls me and thanks me for her son, how do you think I feel? How would you feel if a mother is grateful to you for the fact that she can now sleep at night or can go for Umrah? If a wife called to thank you for her husband’s recovery, how would you feel?” she asked with emotions rising up her throat.

Recalling his three-year painful separation from his wife, Saud said, “Among many other things she did for me, she also spoke with my wife’s family, explaining to them that this is like a disease that can be cured. I can’t thank Dr Zahra enough. This place gave me my life back. Thank you is not enough.