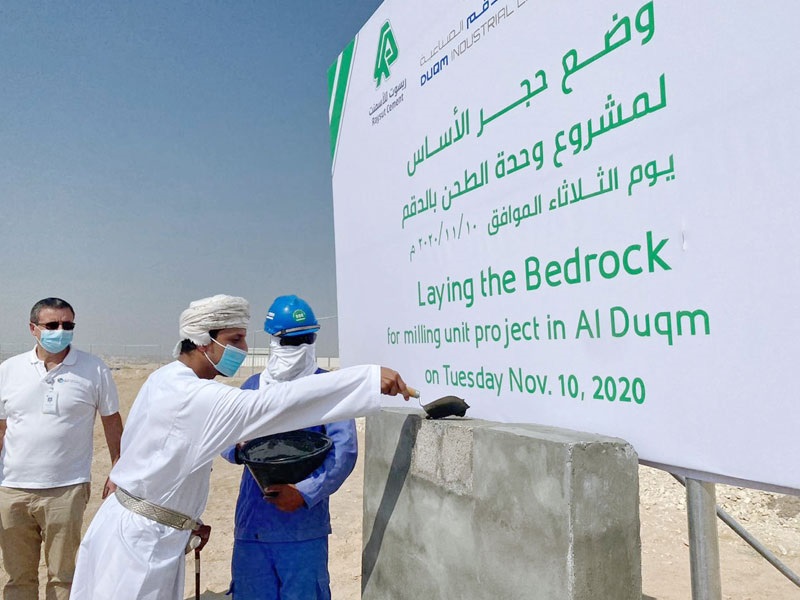 The development of Raysut Cement’s Duqm plant will complement the company’s leadership in cement manufacturing adding another 1mn tonne to the overall group output, taking the total production capacity to 7.4mn tonnes per annum.

“Today’s groundbreaking is a milestone for Raysut Cement on two counts. It will contribute significantly to our ambitious capacity expansion targets of 10mn tonnes by 2022 which is expected to be further scaled up to 22mn tonnes in the near future. Second, it will help us generate more employment opportunities aiding our efforts to enhance social and economic progress in Oman,” said Raysut Cement’s group CEO Joey Ghose.

Last year Raysut had signed a land lease and port of terminal services agreement with Port of Duqm Company as part of the development of the new grinding unit.

“The new grinding unit will add more muscle to our capability to cater to the regional and global markets of Raysut Cement which continues to expand with new investments and acquisitions in Oman, Asia and East Africa,” said Salim bin Ahmed al Ibrahim, acting deputy group CEO of Raysut Cement.

He said Raysut Cement’s investments are calibrated to ensure that these are in locations where demand is high and locally available additives are at close proximity. “Duqm unit will help the company consolidate and strengthen its presence in Oman and the neighbouring Gulf markets.”

Raysut Cement has been on a spree of expansion through acquisitions and new investments in Oman as well as globally in the past one year.

In May 2019, Raysut Cement acquired Sohar Cement Company at a value of US$60mn. As part of its global expansion, the company had also announced developing a new greenfield 1.2mn tonnes per annum cement plant near Tbilisi in Georgia, at an investment outlay of US$200mn last October.

Raysut Cement’s latest acquisition was a majority takeover of LafargeHolcim’s cement terminal at Thilafushi Islands in the Maldives in October this year. Last year, the company had also announced investing US$40mn in a new grinding unit in Berbera, Somaliland in East Africa.

“Our aim is to develop Raysut Cement into a global leader in cement manufacturing, supply and exports, and the development of Duqm is an important element in this strategy. Our expansions are dovetailed to the opportunities that exist and are upcoming in the markets we focus on, like for instance in East Africa, a booming market for the next 50 years,” said Ghose.