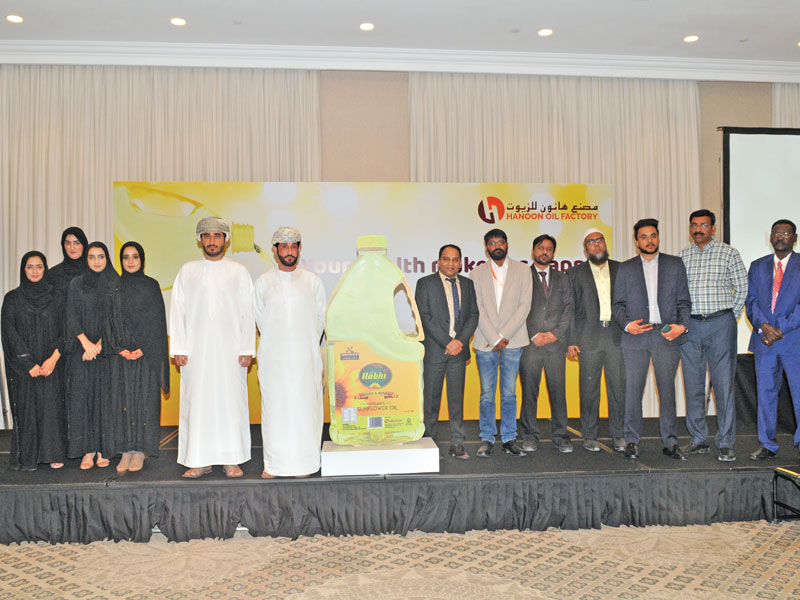 Hanoon Oil Factory, which recently commissioned its manufacturing unit in Sohar, on Monday announced that it is aiming to achieve RO60mn in annual revenues within next five years, majority of which would come from exports of branded edible oils.

Speaking to Muscat Daily on the sidelines of an event to announce the launch of the company’s branded edible oil products in the country, Hanoon Oil Factory’s senior project manager Anil Kumar said they have chalked out an aggressive plan to place their products in Oman and other GCC markets. Hanoon Oil Factory, at an event held on Monday at Crowne Plaza Muscat on Monday, launched five healthy, highquality and competitive brands of vegetable oils, namely Hawa, Wazha, Al Nakhi, Zuhur and Kaizoot.

The company officials announced that they are planning to launch these products, which are going to be produced at its manufacturing unit in Sohar, in some African and other GCC countries, where the company already has a sales and distribution network.

Speaking about future plans, Kumar said they are hoping to achieve revenue of around RO15mn in the first year of operation with only 40 per cent of capacity utilisation. “Gradually, as the demand for the product will grow the company will increase the production and by the fifth year of operation, we are hoping to achieve a turnover of around RO60mn per annum.

“Majority of the revenue would come from exports as we are going to launch products in several other markets in Africa and GCC region,” said Kumar. Speaking about Sohar manufacturing unit, he said they started working on plan and other things in 2016, and the whole work was completed in 2019.

The factory, which has around 18,000 tonnes filling capacity and was constructed with an investment of around RO20mn, got commissioned in January this year. “Committed to producing top-notch edible oils, Hanoon Oil Factory is focused on maintaining quality and healthiness of all oils produced,” said Jasim Kuniyil, vice chairman of Hanoon Oil Factory.